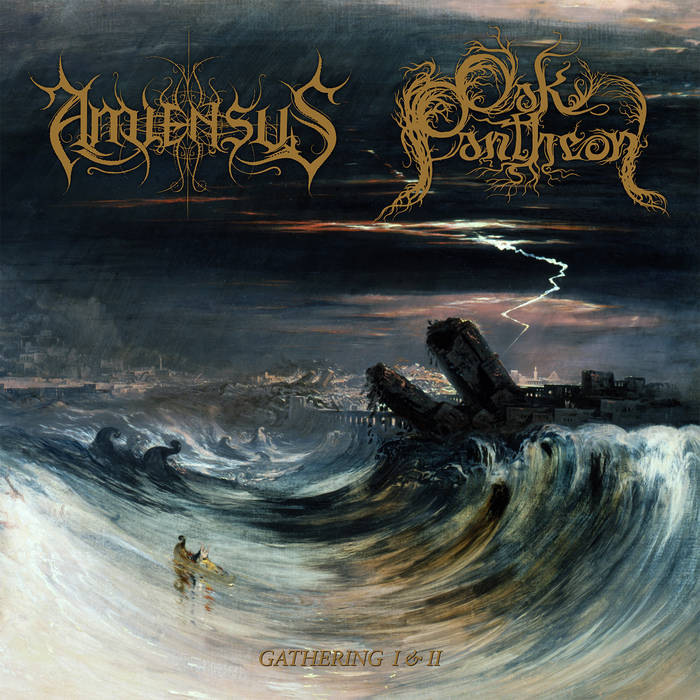 Obstacle of Affliction Outstanding split release which then evolves into a excellent collaboration between two great bands. The vinyl pressing does not fail these musicians work. Favorite track: AMIENSUS / OAK PANTHEON - Tanequil.

The alliance of CASUS BELLI MUSICA and BEVERINA proudly re-releases a joint work of talented American bands AMIENSUS and OAK PANTHEON on vinyl. The bands’ music is at the interface of atmospheric black metal, progressive black metal and post-metal.

The re-release consists of two split-albums dated, correspondingly, 2013 and 2018. The release has a common title “Gathering I & II”.

“Gathering I” began back in early 2013. OAK PANTHEON reached out to AMIENSUS after the first AMIENSUS’ album “Restoration” was released. Finding similarities with music, interests, and hobbies, both bands formed a friendship, and after a short time decided that a split would be a great idea. The result was an extremely well received and highly touted first split, titled Gathering. The title was chosen because of the bond and symbolism of both bands. Five years later, and a few albums between for each band, AMIENSUS and OAK PANTHEON set out to not only create another split, but create its first song together. Over time, the friendships grew, and the musicians evolved, to create an ever more impressive “Gathering II” featuring a track from both bands and a collaboration track written together.

Written, Performed, and Produced by Oak Pantheon
Mastered by ARSAFES

Featuring artwork by Carvaggio (The Sacrifice of Isaac, 1602) and John Martin (The Destruction of Tyre, 1840)