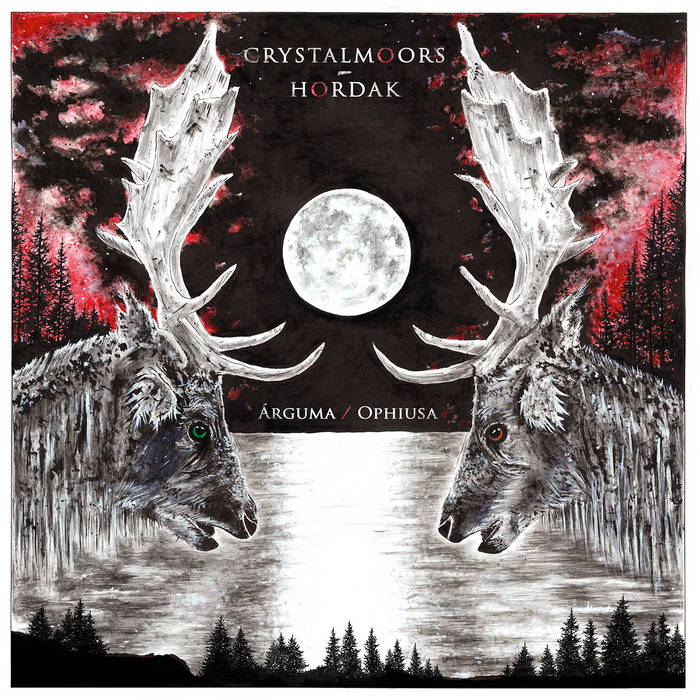 CRYSTALMOORS’ part is titled as “Árguma” in Cantabrian – paying an homage to a shrub called “gorse” (Ulex Europaeus) with 4-cm thorns, and deep and strong roots. Árguma (also known as Tojo) symbolizes the Cantabrian nation of the pre-Roman epoch, bristling in the same way for self-defense and deeply rooted in its native land.

Árguma grows throughout Europe and it is one of the native species of Cantabria (North Iberia), as well as one of the most dangerous 100 invasive species.

The part of HORDAK is titled as “Ophiusa”, it is a 20-minute song divided into 7 different chapters. Each chapter transforms through different musical environments, but all of them are bound by the same atmosphere and concept.

“Ophiusa” means “the land of the serpents”, it is one of the very first names the ancient Greeks used for the Iberian Peninsula.
“The lyrical concept behind it explores the light and shadows of our homeland from a devoted, but at the same time critical and skeptical point of view: dangerous, wild, difficult to be conquered…”

“Ophiusa” stands for HORDAK´s 5th opus – the band’s most challenging and experimental material so far.

REVIEWS:
“Árguma / Ophiusa” is a stunning release that’s sure to capture the imagination of many and continue to take us through the many planes and forces of nature like many of us having been craving for. - HEADBANGER REVIEWS bit.ly/2OX7OnL

Árguma was recorded in april 2018 in Drive Division Studios by Alex Pis.
Mixed and mastered in BeardStudios by Borja Muro and Javi Peña in June 2018.
Music by CrystalMoors.
Lyrics by Lavín "Uruksoth"
Santoor track in "Hijos del Sol" by Borja Muro.
Harps and Synths by Igor "Crveni Orao" Bučnjec.

Ophiusa was composed, recorded, mixed and mastered by Hordak in the Polluelito Studios between 2016 and 2018
Music by Winter War and Autumn War - Arrangements by Hordak - Lyrics by Autumn War - Engineered by A. Mansilla
Violin – Laura Camón Botella