by THE NEGATIVE BIAS / GOLDEN DAWN 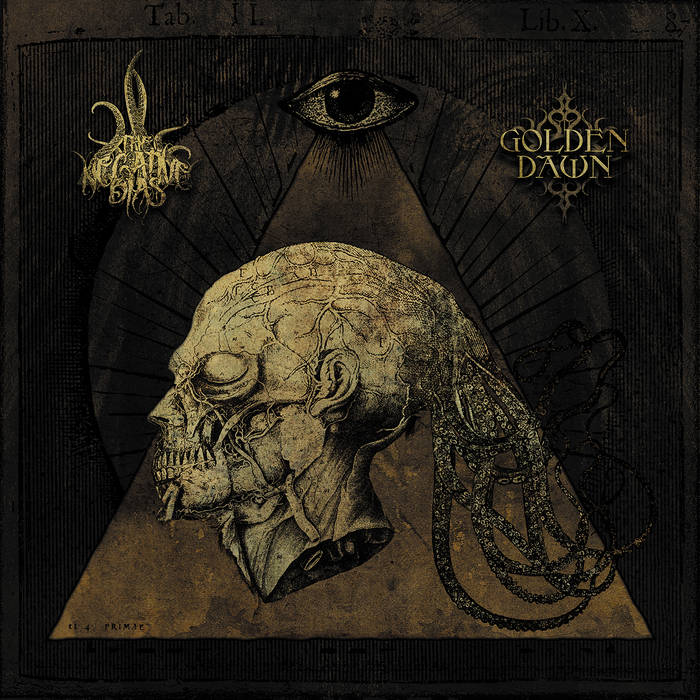 kwb560 I cannot pick a favorite track. I can’t even pick which side of the split I prefer. This is absolutely one of my favorite grabs of the year. I’m looking for more from these guys right now, it’s that gd good.


THE NEGATIVE BIAS formed in 2016 by I.F.S. (ex Alastor) realizes his own visions with the musical help of Stefan Traunmüller of the legendary project Golden Dawn.
The Negative Bias channels a transcendental nightmare from the deepest dark space revealing astral atmospheric black metal of a higher order. Mixing futurist cold perceptions and a visionary spectrum of primeval fear The Negative Bias looks over the usual terrestrial wall, raising an even more disturbing assumption on the narrative of the future.Their musical approach consists of wisely alternated atmospheric and ambient layers with ominous melody and choral harmonies. This is symphonic Black Metal in all of its grandiose majesty without sounding too nostalgic but aspiring to create a modernist bleak vision with complex songwriting and brooding, gritty distain. On the tail of the band’s debut album, ‘Lamentation of the Chaos Omega’, 2018 heralds a new collaboration with Golden Dawn and the track, ‘The Temple of Cruel Empathy’.

GOLDEN DAWN formed as a solo act in 1992 by Stefan Traunmüller (Wallachia & RAUHNÅCHT), originally under the pseudonym 'Dreamlord', due to a deep connection with dreams and the intricate landscape of dreaming.
Golden Dawn was part of the Austrian Black Metal Syndicate (Pervertum, Trifixion, Pazuzu, Knechte des Schreckens and Vuzem; the predecessor of Hollenthon) and following the 'Lullaby' demo & ‘Apeiron’ split (1994) the debut album, ‘The Art of Dreaming’ was recorded and released in 1996 with session help from Thomas Tannenberger (Abigor) and Martin Schirenc (Pungent Stench).The album is considered a classic of Black Metal’s second wave. Inspired by shamanism, lucid dreaming and personal experiences with astral travel. It is a rich tapestry of creativity melding symphonic black metal and dungeon synth with dynamic and complex compositions which are bombastic and majestic whilst never forsaking their raw edge, or Black Metal roots.
The song ‘Lunar Serpent’ revealed for the first time on the forthcoming split release dates back to 2010.
Now remixed, it marks a return to the rich atmospheric style of ‘The Art of Dreaming’. Like much of Golden Dawn’s work it has remained until now unreleased and is just one piece of Golden Dawn’s archives which has recently been unearthed and reissued.The culmination of the mutual collaboration between Golden Dawn and The Negative Bias is a special split release featuring two lengthy songs of grandiose Austrian Black Metal, ‘The Temple of Cruel Empathy’ by The Negative Bias and Golden Dawn’s previously unreleased ‘Lunar Serpent’.