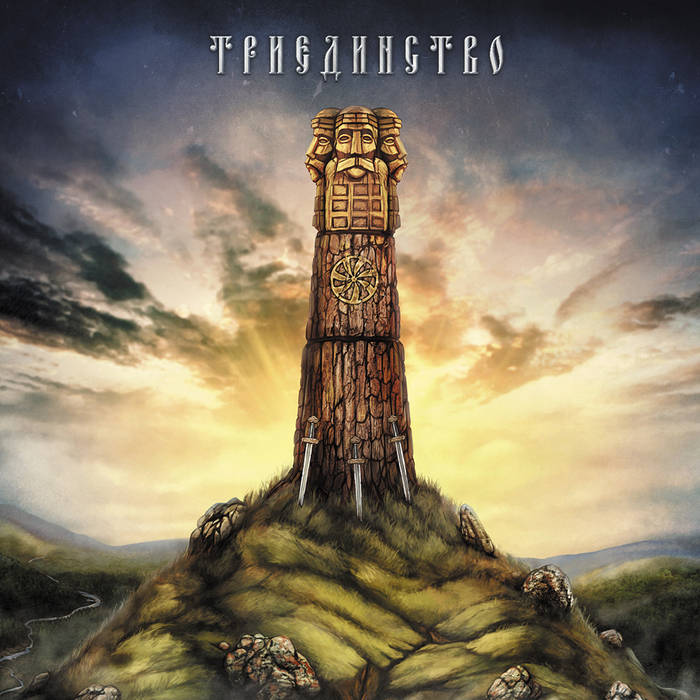 "Triunity" is a conceptual split-album of three Slavonic groups: OPRICH (Russia), PIAREVARACIEN (Belarus) and CHUR (Ukraine). The project "Triunity" is to express historical solidarity of our Slavonic nations and their kinship of cultural roots, and, at the same time, underline the unique features of each nation's heritage. The album is released by Casus Belli Musica (Russia) as a limited edition hand-numbered collection CD.

The project’s main idea is the idea of Slavonic Unity of Russian, Belarusian and Ukrainian people. As the historical fates decree, we found ourselves being separated by borders, but at the same time bound by strong ties of our kinship, unity of cultural roots, bonds of common victories and defeats which, sometimes, are stronger than consanguinity.

The participants of "Triunity" are far from being newcomers in music, and are rather big names not only in their Homeland, but also among connoisseurs of Slavonic pagan/folk metal in Europe, North and South Americas, and as well as in Japan.

OPRICH had been founded in the city of Rybinsk (Yaroslavl region) in the autumn of 1998. The Old Russian word "oprich" means "from the outside", "except", "on the contrary", “contra” – so has the sense of isolation, opposition and fight.

The severe, majestic and surprisingly beautiful nature of the Upper Volga region left traces on all creative work of the group. Where the wide deep Volga, where the dense impassable woods and bogs recede into the foggy haze of the horizon – there the Northern Russian land of the free, since ancient times, gathered crowds of daredevils to get their good fortune by their sharp blades. And gusli strings roll, heavy oars beat in the waves of the Northern rivers, blades ring in the whirl of wars as parts of OPRICH’s songs. Among all of this the main thing also sounds: will and daring, force and pride, the Sun worshippers’ sincere pleasure living in Russian hearts. And this life flares as unrestrained primordial fire.

PIAREVARACIEN (Minsk) had its start-up in 2006. The band plays Pagan metal. The band’s lyrics concerns such topics as paganism, national revival, war, death and life questions, pride for the past, present and future of Belarus.

The nature of Belarus is mostly dense pine forests, blue-eyed lakes and wide fields. There are still many places nowadays which carry the pagan spirit, Ancestors memory and pride for the nation through ages.

Belarus is proud of its past, whether it is the time of The Grand Duchy of Lithuania or The Polish-Lithuanian Commonwealth, and WW2 etc.

CHUR had been founded in the city of Kherson in 2005 and initially was a one-man project. The word "chur" is a multilateral concept. In Slavonic mythology it is a god-patron of a kin, a guardian of his possession borders. "Chur" is an Ancestor. “Chur menya!” means literally “Ancestor, protect me!”

CHUR draws inspiration in the boundless Ukrainian steppes warmed by the hot Southern sun, in apricot gardens, where the air is warm and sweet, and the tree branches bend under the weight of their ripe fruits, in the ringing voices of maidens, and in proud Cossack songs.

The art studio Kogaion Art (Romania) was involved for creation of the album’s visual art. Magnificent drawings of Alexander Moga allowed emphasizing ideas and the images in "Triunity" music more deeply, and provided the project with the conceptual completeness.